Dear community,
I have an unusual question concerning the power curve / diagram while Zwifting. There are some guys at Zwift who have a really flat power indication. My curve in comparisson to that is „irregular“ - sometimes my indicated power output fluctuates between +/-10 units while the subjective workload remains the same. Is there any setting in ZWIFT which eliminates that issue? It is not really disturbing while performing a workout but a bit unusual. For my indoor trainings I use the Elite Suito. I dont‘t think that the smart trainer is the reason. Other Zwifters wirth the same trainer do not have that issue. Thanks in advance for your Support! 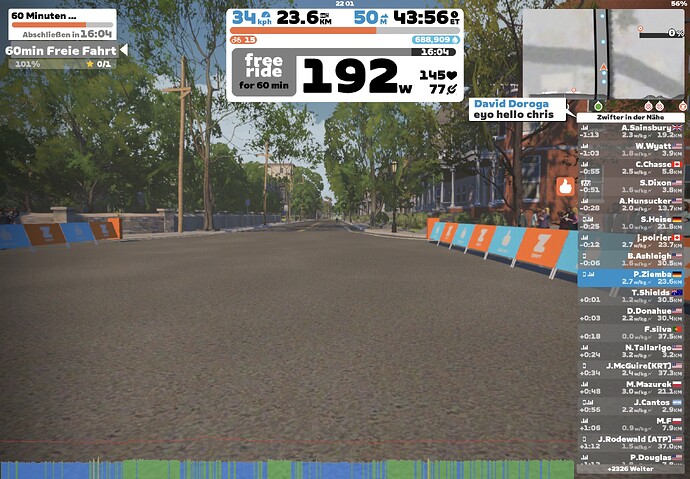 that’s normal, nobody has a perfectly smooth power output. it’s actually the people with super stable graphs that are having their power misrepresented, it’s a feature enabled by default on wahoo trainers… it’s misrepresenting the actual power the user is putting out though. it could be out by 10% and it will still report it as right on target

your graph is absolutely fine

It looks like the workout for which you have included the photos is just a 60 minute ‘free ride’. For this type of workout, YOU are in control of the power output, so it might be all over the place depending on your cadence, gearing, and actual power output. I would guess that the people you are seeing with ‘flat’ power are using ERG mode, where the trainer resistance is constantly adjusting to compensate for the changes in gearing and cadence in order to maintain a (reasonably) steady power output.