We are excited to announce the release on handcyles in Zwift. 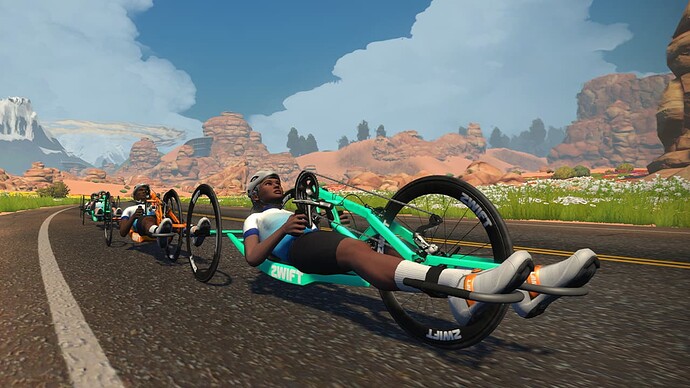 Zwift is a platform for everyone and our goal is to represent all members of our community within the worlds of Zwift. We hope that the Zwift Handcycle will allow adaptive athletes to have more fun in-game and better represent themselves on the roads of Watopia. 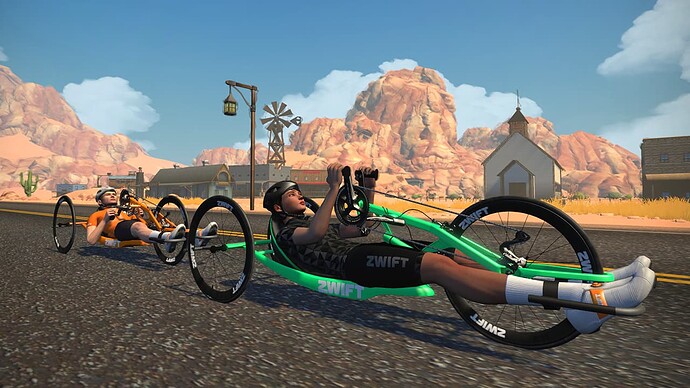 To learn more, check out our Handcycles FAQ!

Bravo! This is a welcome addition to Zwift and something the adaptive community has been asking for.

How does the handcycle’s aerodynamic drag compare to other bikes in-game?

Q: Can conventional bikes draft off of the handcycle bikes in-game?

A: No bikes in Zwift receive any draft benefit from riding behind a handcycle, except other handcycles.

I think the handcycles should get full draft benefit and also allow all other bikes to draft. I may be wrong, but I dont think users are going to choose this bike for some sort of advantage. However it would be nice for those who use it to represent themselves in game to be able to keep up with their friends who are on regular bikes.

To be clear- the draft is described in our monthly release note thread.

The draft IRL for handcycles doesn’t work like that though.

Lots of things dont work like Zwift IRL, why penalize an adaptive cyclist in the virtual world?

I seems like a trade-off between inclusivity and accuracy. I’d like to hear what adaptive cyclists think about it. If an adaptive cyclist’s goal is to be able to hang with group rides, this bike probably won’t help much and they’ll be better off on a conventional bike in game. If the goal is to have a realistic handcycle experience, then it’s probably fairly close (although drafting behind low recumbents and handcycles on an upright bike does get some benefit).

I may be wrong, but I dont think users are going to choose this bike for some sort of advantage.

I think some people would choose them if they are faster just for the advantage. Then there’d be a whole new set of complaints in races I imagine.

Additionally, road bikes will not be able to draft handcycles

Wont that cause havoc in normal group rides where we would love to see them used?

It seems to have been designed to avoid that. It’s apparently not a good TT bike and the weight and lack of received draft mean it’s probably not good for pack riding. I imagine @Eric_Schlange_ZwftIn will tell us the real deal at some point.

Correct, the way they are now it wouldn’t be an issue. But if they did make them such that they were an advantage some folks would naturally choose them to get more drops, go a bit faster etc. Mike was suggesting folks wouldn’t do that, I have less faith in that

If I’m reading this right handcycles are more aero (equivalent to a TT bike) than road bikes and they get full draft from other handcycles while road bikes get no draft from handcycles. A single handcycle in a race is not much of an issue but 4 or 5 handcycles in a race should be able to easily form a breakaway group and simply ride away from the road bikes (it would be like having permanent aero and burrito power ups).

This is going to go pear shaped real quick.

More aero, yes, but also spec’d as being ‘significantly heavier’ than a regular bike.

In my experience, a handcycle gets all but full draft off a conventional cyclist IRL. Just not the other way around due to our low profile. I do group rides in Zwift because I want to hang & chat with the group, who are obviously a lot stronger using their legs. If I’m not getting the same draft they are then I won’t use the handcycle in group rides which is disappointing as I’ve been waiting for this. It is already harder for a handcycle to hang with the group. I see no sense in making it harder. I thought Zwift’s motto was “make indoor training fun”. I guess this is why I see other handcycle users obviously fudging their weight on Zwift.

If I’m not getting the same draft they are then I won’t use the handcycle in group rides which is disappointing as I’ve been waiting for this. It is already harder for a handcycle to hang with the group. I see no sense in making it harder.

this was my thought too, I would rather see the handcyclists be part of the large group than be segregated into their own small groups/rides.

Let’s be inclusive, just make the handcycle similar to a middle of the road bike and get/give full draft.

I did all the required climbing in order to get the tron bike. Now all that work is voided & I’ll be going backwards. It is a shame.

It’s great to finally see this development! Is there a way to make the handcycles behave like an average bike just for events? I remember the havoc TT bikes used to cause in events before organizers could ban them.

I suppose it comes down to the feedback that the adaptive community gives.

So awesome to see this. Thanks for making it happen.

Since handcycles correlate with adaptive athletes, I’d like to quote a section of the resource megathread.

EDIT - I’m just catching up on the draft, weight, aero discussion. Perhaps Zwift will make some tweaks to those once they get some data on how the handcycles are being used.

I just tried a race on a handcycle (Stage 2: Get Rolling on Sand & Sequoias, cat B). I needed about 0.5 to 1.0 W/kg more than the riders around me to keep up at the start. After 5 minutes of pushing 3.8W/kg trying to stay in the draft, instead of the usual 3-3.2W/kg I can get away with on that course, I gave up and quit before I got near any hills.

From that brief experience I don’t feel the aero advantage of the handcycle is enough to overcome the reduced draft. I don’t think I could recommend that anyone uses the handcycle in a race as it seems to put you at a distinct disadvantage. It might be different if half the field was handcyles though. Anyone want to try that experiment?

EDIT: One other thing I noticed is the camera position. The default position puts the camera at head height of road cycles so you occassionally get to see the insides of other people’s heads. The second position seems to put you at crotch height.