Ideally, HUDs should be described in XML with placeholders for the supported data elements. Font, locations, everything should be customizable (location and size in % related to screen size) so you could share your creations with others.

As a bonus, it would be nice to write plugins in some language that would listen for events and draw to a canvas (custom graphs).

Of course, supporting stuff like that on Apple TV would probably be… non-trivial. Well, I guess they could be downloaded from some central, trusted store(?)

For the lack of customized HUD option, I had the opportunity to make my own HUD because I live stream rides so I created my own layout. The idea is to show minimal screen “noise” and show the only matrices that mattered to me. 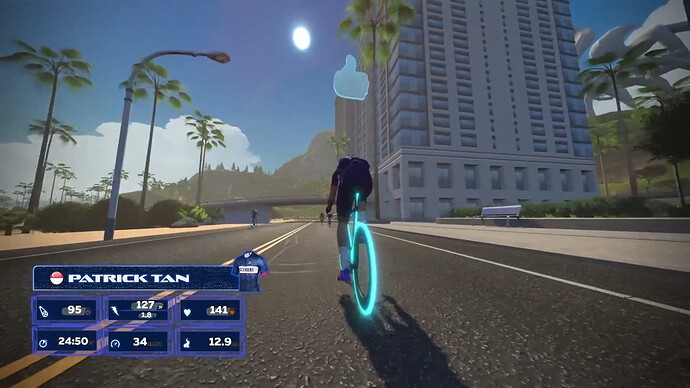 @Gerrie_Delport_ODZ I realize it is 4 months later, I just came back to this topic to see if there were any updates. Reading through some of the posts again, I realized that I totally and completely misunderstood your comment. I now understand what you meant, so I sincerely apologize for my harsh (and probably somewhat puzzling) reply. Cheers.

It is sometimes hard to get a point across when writing.

We are all here to learn from each other.

Something like a virtual Garmin with say up to 10 fields then you can choose what you want in each field. Maybe you want average power, max power, 5 minute power, etc.

That would be nifty. Maybe you could even change it while riding, hold the mouse button down on a field to change what is shown… (sorry Apple TV).

I would love to be able to toggle only certain HUD elements, not just the whole HUD as either on or off. For example, there are times when I may only want to see the speed, distance, elevation gain, timer, level progress, and route progress. There may be other times I want to see that and the Zwifters Nearby list to follow messages. There may be times I just want to see my watts, cadence, and HR. In other words, instead of just toggling the HUD (with H on the keyboard) as either on or off, have the option to toggle different fields, each with a particular keystroke.

Suggested keystrokes in addition to those currently established:

This way, a Zwifter can have as much or as little data on their screens. Additional icons/buttons can be added to the action bar as well.

Yes Please! Even toggle on/off should be very easy as a first update. Next update can be moving, sizing, selecting what shows and what does not.

toggle on/off should be very easy as a first update.

This has been possible for over a year. Press H on the keyboard, or use the on-screen button in game or Companion app.

I’m so surprised this isn’t a feature already. I wish it were! I’m always calculating my average speed in my head during my rides haha! Would love to have that on my dashboard just like I can do on my Garmin when riding IRL.

I’d love to have a customizable HUD. On a 4k screen the elements are way too big, I’d like to have them smaller to get a better view of the game.

+1
plasma screen user here. this old tv is dedicated now. make it at least transparent or can we please choose to show hide some parts of the ui

for one, that huge banner up top, totally useless for me.

I’m in a group ride, I lose the chat if I hide the ui.
I care about watts. w/kg, average w/kg, cadence hr. and the chat. as a ride leader, it’s cumbersome on the companion app if I hide the ui

chats go in a window where I don’t see w, w/kg. And that average w/kg, which is essentially on ANY head unit IRL.

Connecting the gps unit to the trainer is a workaround, but a useless one as that information is already being calculated in the background anyway by zwift.

thanks for your time, love the game.

Is this even being worked on?

I doubt it. The only response from Zwift over the last 4 years was from a person who now works for Peloton, and that response promised nothing.

their dev is busy sorting out pack dynamics 4.0

Careful, it may crash the game

Has anyone from Zwift commented on this request? I remember making this exact request during the beta and Jon M. responded with some thoughtful questions about what data might be helpful. The HUD and in-game UI have gone backwards in a hurry, especially with introduction of that god awful typeface. Using one that isn’t monospaced in a dynamic environment is just terrible design.

Using one that isn’t monospaced in a dynamic environment is just terrible design.

FWIW - Go back and look at some of @Shane_Miller_GPLama course ride through videos, and you’ll see that a previous typeface wasn’t exactly monospaced, either.

I don’t think anyone had much positive to say about the previous choice, but the lack of monospacing was less noticeable because the typeface was actually readable. Regardless, looks like we’re approaching four years with this feature request open with no real updates.