Was 9 weeks into a training program and new update has totally messed it up - is now only offering me workouts from week 8. Any hope of getting this fixed in time for me to finish program? 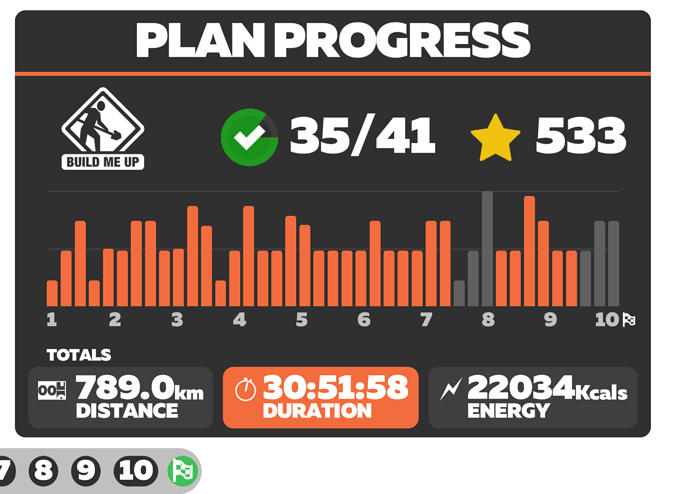 After hearing people’s issues with the training plans I turned off app-updates on my iPad before the update installed. I only have 2 workouts left of BMU and it would be frustrating if they got messed up at this juncture as it did with yours. So app updates are off for the next 3 days for me and I hope I don’t run into this issue in the meantime.

For folks doing the BMU plan, the good news is the actual workouts were also copied into the daily workout section, so you can load up those workouts individually as a temporary workaround until this issue is sorted out.

Wow did this update ever mess my stuff up, disconnected me twice from my phone, companion didn’t even load ToW running. Finally got in, kicked me out once more. Finally fed up and tried updating my tablet only to get disconnected again,. I think I only ran about 3.8 KM,… what a mess

Brilliant to see constant updates, any more uphill steep trails coming, could do with a kappa quest version of alpe du Zwift, really enjoy the workout of the constant gradient changes.

Also, why am I testing this

Because “You gots ta know!”

Anyone having internet connectivity problems since this update? Tonight I paired directly to Zwift on Apple TV via Bluetooth using my Assioma pedals as the power source and my trainer (Tacx Neo 2T) as the controllable. Didn’t want to risk pairing via the Companion app because of all the recent Bluetooth issues I’d been having. Anyway, 40 mins into a WTRL-TTT race and my team members suddenly disappeared followed by a connectivity failure. Managed to reconnect about 1 minute later but by then my TT was totally FUBARd. Since I started Zwifting using this set-up I have NEVER had any internet connectivity issues until tonight. I honestly want to just give up with all this…can’t be doing with it anymore.

Two theories on the weird CPU issues. When a lot of riders are nearby but facing the other way on the road, the Zwifters nearby list seems to act strangely - the names keep disappearing and then it slowly repopulates and this happens over and over. This doesn’t happen when everyone’s facing the same way as you - the list takes up the whole screen and stays that way. It’s as if the game isn’t properly separating riders on either side of the road.

Maybe more like the set of 100 nearest riders changes so much so quickly in situations with lots of oncoming traffic that the UI can’t keep up. The proximity seems to be measured along a straight line rather than the road, leading to situations where you can’t see all the riders in front of you before a hairpin turn but can “see” some beyond it (regardless of whether they are visible on screen as anything other than dots on the minimap) or some of the riders shown are on a different level in NYC/Neokyo/the volcano.

Since I started Zwifting using this set-up I have NEVER had any internet connectivity issues until tonight. I honestly want to just give up with all this…

Kind of strange to give up after one internet drop isn’t it? Network failures aren’t usually on the Zwift server side either, almost always on the user’s side. My ISP went out twice last month for unknown reasons and I had to use my mobile hot spot, that wasn’t Zwift’s fault it was Spectrum internet’s fault.

Yeah to be honest having done some more testing I don’t think the basics of the game have changed. It’s just that something’s taking up much more CPU resource than normal so these aspects are suddenly significantly worse, and are individually are now enough to drop the game below 60fps etc. Likewise with the shadows. So the mere presence of the HUD is problematic, for example. Wouldn’t usually be a consideration.

Yeah, I think something in that direction happened already with the November release, at my end that has manifested itself mainly as increased dropouts, but there have been other changes as well (just can’t remember what specifically).

Said it before and will probably keep on saying it…I have had more connection problems since the January update than I had all of the previous two years. Its literally every other ride now. It is a shame because I really like Zwift but if I have to put up with the connection problems much more I will have to go to another platform for my own sanity.

In recent days, I’ve noticed a few things I have never seen before on Apple TV since the most recent two updates.

Can’t say on the 100 riders thing but the train stuttering could fit with there being additional CPU load in the game across the board, making edge cases noticeably worse.

I notice there’s also an increase in people reporting crashes since the turn of the year. All related IMO, the game is creating more stress on systems for some reason.

Well Zwift did deprecate/obsolete a bunch of systems and/or hardware w/the change in the minimum system requirements. While it could mean that certain things are old, outdated, etc., and a tiny percentage of the user base thus making continued support not worthwhile, it could also mean that Zwift is becoming more resource intensive/hungry.

Note: I’m all for cleaning house and having a sunset date on old hardware and/or OSs

Agree in principle, but I know someone with an i7-9700 that can’t hold 60fps in a solo ride on Watopia any more.

It is based on 100 closest riders by proximity as the Bot Ride is still an open group so the nearest around you are taken into consideration, oncoming and those in the same direction.

Every time you do an update my BT and syncing gets f’d up… EVERY TIME! My rides aren’t syncing with Strava with this update. I’ll give it a week then I’m canceling my subscription. No need to pay if the ■■■■ does t work!