Bumping this for two reasons.

First, since switching from the iPad on the Tacx handlebar mount to the TV on the wall (it’s now a 4k OLED, total overkill - I love it), I took the upper part of the tablet mount off and it still works great just to hold the cell phone: 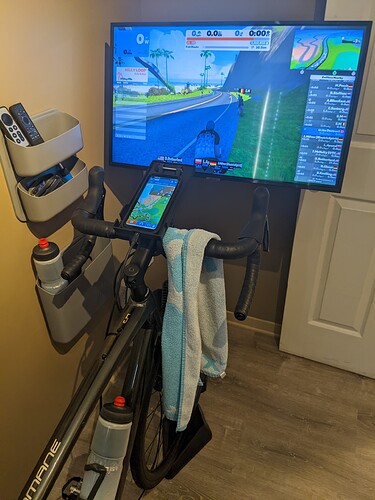 …and second: show us your latest pain-caves!

I’m literally using the cardboard boxes my kickr core came with as my table top to hold my iPad. Maybe I’ll get a table someday.

Aaron! You sound like a prime candidate for the Tacx Tablet mount!

You sound like a prime candidate for the Tacx Tablet mount!

Maybe I’ll add it to the b-day wishlist - My amazing “cardboard box mount” also holds nutrition and remote controls, so I’d have to shift things around a bit I think 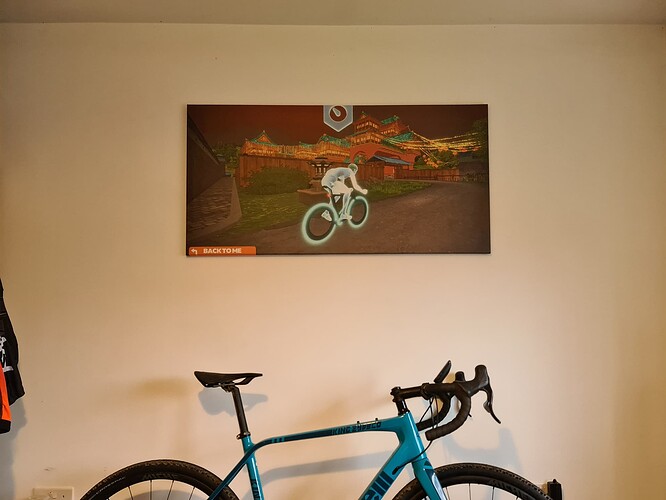 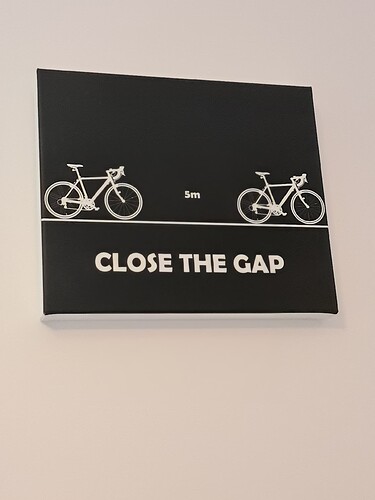 Every Zwifter should have one of these:

They were a lot cheaper (like $65) when I got mine last year, but it’s still a lot cheaper than the Wahoo fan and probably better. It’s not silent but I think it’s quiet enough to use indoors… but I usually ride with earbuds and don’t hear it at all.

I’m going to add an aviation them to my pain cave.

My office at home has framed all the vintage Boeing 707 adverts from the late 1950s, from launch and into entry to service.

My pain cave will have posters for General Electric GE4 turbojet (for B2707) and Bristol Olympus turbojet for Avro Vulcan.

They just need to be framed and hung on the wall. 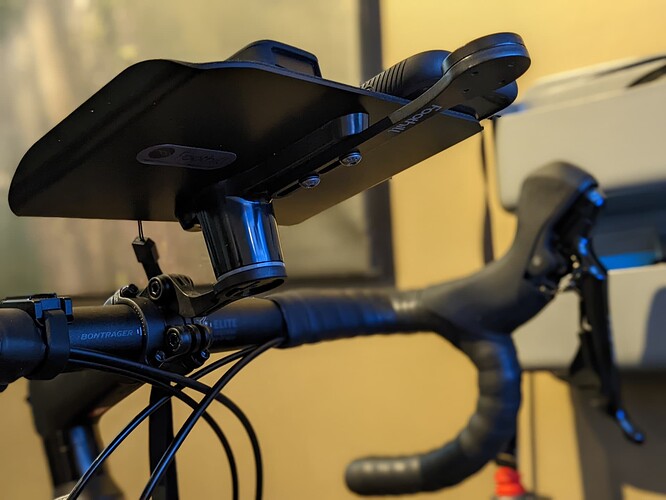 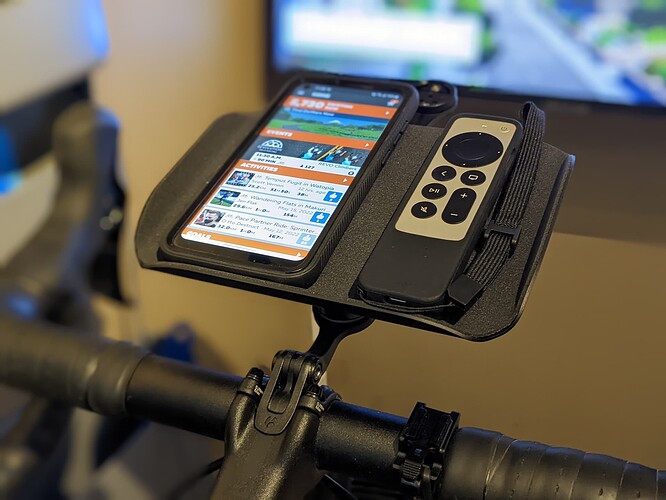 Several rides into it, loving the Trainer Tray. It’s super easy to remove and install when taking the bike outside. The additional “out front” mount would put a Garmin Edge right where I’d want it. (planning to add that this season instead of using sport watch)

I’m really curious how most people mount or store their phones when using the Companion App. Desk in front or beside the bike? Handlebar mount?

Cheap phone case from eBay with some slots cut in for velcro straps, which hold it to the stem. Bit of foam underneath was needed to fill the gap, total cost was about £3. I just snap my phone into the case, works perfectly. Out front mounts don’t work for me because I use a towel draped across my handlebars. 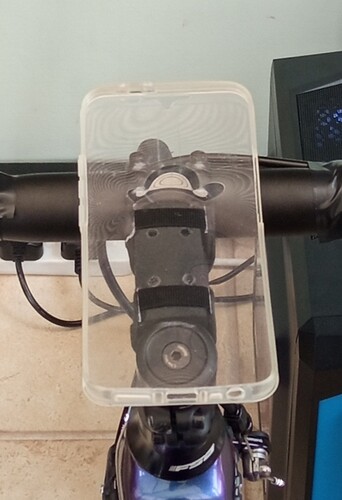 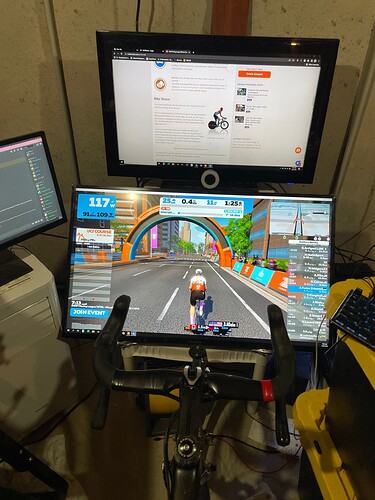 2 fans: one mounted to the floor joists above and one on the floor. 3 screens: left for discord or course maps, upper, music/videos, lower for riding game(s).

ZCA: used to work on my Hammerhead k2 on my bars but now I’m back to my phone on the storage tubs to my right.

I’m really curious how most people mount or store their phones when using the Companion App. Desk in front or beside the bike? Handlebar mount?

Velcro on stem for 8’ tablet.

Edit: pic from the shed - can just see the white velcro under tablet. 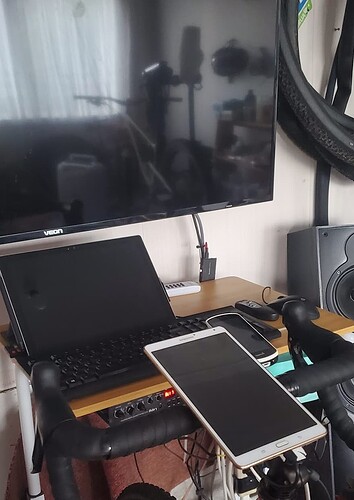 Note - the SurfacePro is not used for Zwift and I’d never recommend one - it runs network diag stuff and Spotify / VLC while riding.

I have the same trainer. I have an Apple TV 4K module and a 4K monitor on the wall, and on the bars I have a holder for the I-phone. It is fantastic. Sometimes I want to warm up or do a high intensity fitness session, guess what. I ride intensely for 15 minutes, get off the bike, lift weights, do squats, get back on the bike, repeat in fifteen minutes. I live in one of the best places in the world to road bike on Skyline Boulevard in Palo Alto, also one of the best places to Gravel Bike, and I just want variety on the trainer. What I like to do, watch Apple TV Music videos once I get off the bike, it is a blast, on the bike, Zwifting, off the bike, Music Videos it is a blast. I have a rule, if I Zwift, I have to go out and ride. Zwift is not a substitute for me, it is augmentation tool. I like the short rides with planks and gravel and cobbles the best for the road feel. I think the climbs are harder on Zwift. I like climbing. I have some favorite California Climbs, all spectacular, nothing climbs as beautifully as the North Entrance of Big Basin State Park.

I have the same trainer.

Same trainer as …??? Pic or it didnt happen.

Decided this looked pretty shite so I bought a new case.

Same principle though. This one cost a fiver. 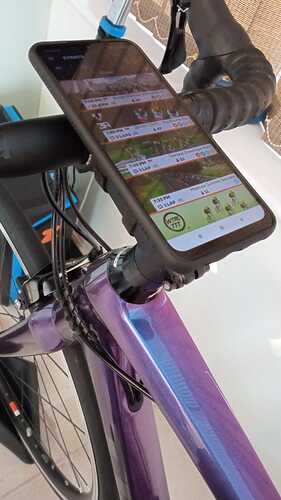 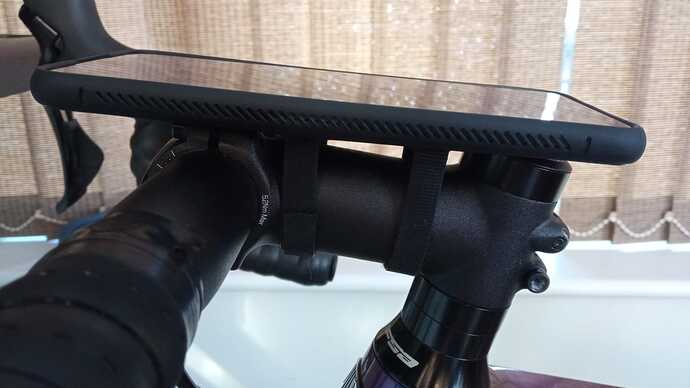 I’m really curious how most people mount or store their phones when using the Companion App.

Nothing fancy. Can’t take a pic because my phone is my camera… but I got a cheap (~$3) “waterproof” phone case from Amazon and some stick-on Garmin mount adapters, and I put it on my out front mount.

I think Mark Lewis should roast your paincave @Daren

“I don’t know if anything highly flammable is stored amongst all that, but I really hope so…”

“You know what this needs first, some speakers duct taped to my TV screen, that’s the priority here”

Isopropanol is flammable I’m pretty sure. Not sure how he missed that!

Also, the speakers are in the perfect place for me to hear my music! Where else am I gonna put them? On the floor?! =)

Saw someone that made an immersive screen on Reddit over the summer. Looked quite amazing and since I had one projector collecting dust I’d figure why not try? Although ideally you have more than one projector that would be besides my initial point of using something I had. Although might still get a second one in the future though…

Anyway, setup by it self: 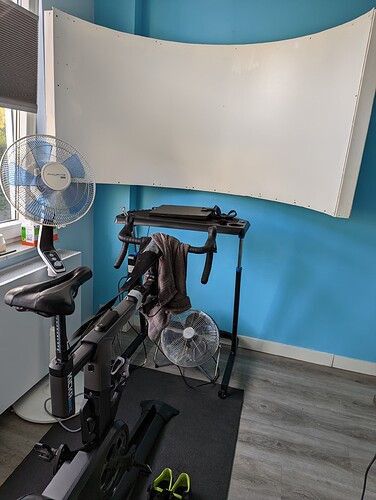 However, better to see it yourself. Still need to fine-tune the screen display, fix up holes and put a proper paint for improved quality. Short clip uploaded to YouTube: Zwift Setup Test - YouTube

Much better than my old setup with old laptop on trainer table. In camera view three it feels immersive which was the point. So quite happy even though I theory it would be better with a second projector and especially with short throw ones (but that I didn’t have) as when Im in a full sprint standing on pedals I have a slight shadow at bottom now.

That’s ace. Where’s the projector mounted, ceiling? You could do with a PC upgrade so that you can hold 60fps all the time. 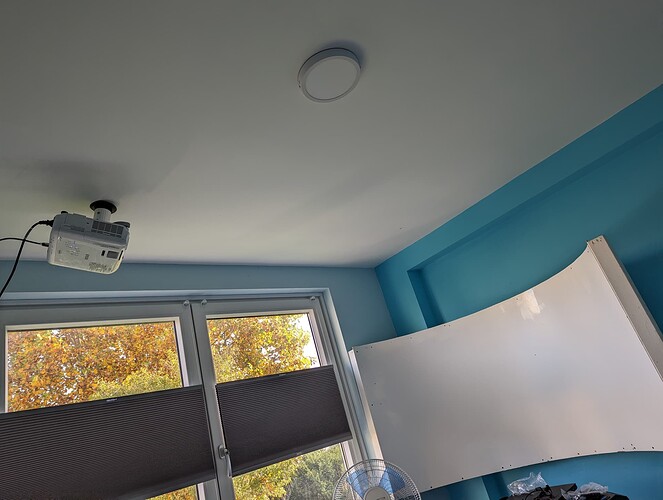 New PC: First followed your advice that it doesn’t need to be expensive. So computer from 2018 with a NVidia card I had already far outperforms my old laptop. We still need things to desire so new PC might be for next year :-). Looked at your suggestions but couldn’t quite get it as cheap as you manage!