I just fan viewed someone riding with Coco (she was at 2.7 w/kg on the flats). This person was staying in her draft holding 2.5 - 2.7 w/kg, once they went up to 3.0 w/kg they would move to the front of the group… reduce power and would slide back behind Coco… seemed normal behavior to me, nothing crazy that I could tell.

This was using 1.2 Taylor …Thanks for trying…I want to just ride a steady ride after a hard weeks work…now im just more fed up than ever and totally frustrated. Last year NOV / DEC I rode 500 miles each month with a PP it was great…it is garbage now …maybe its one pace partner…ill never know… ZWIFT is like a box of chocolates Much appreciate you trying Mike I really do.

Right, I’m injured so my fitness is limited and I can manage to stay with the Coco / Yumi pace partner groups, just…

What happens normally is you get 200 riders (especially if on Tempus which they all prefer) and the group at times moves at 45-47km/h in places. Guys at the front also do 3.5w/kg and this pulls the group along much faster.

So as long as you stay in the draft it’s good, if you drop back at that pace you’ll be gone and have to push big power to get back. If you are light like me then it’s a lot more difficult on any downhill, other riders coast and you have to push 3.5w/kg to avoid getting dropped.

That is what I think is happening.

Yep, that’s about it. It doesn’t help if you join the PP on a fast downhill bit either

If only Chris, I can get how the dynamics might feel and behave, its not like i’d expect. Anyway this is just the same old same old from Zwift …inaccurate, buggy rides. Last night on 1.4 ride it was ok… people say its me last night ride says nope.

Love Zwift but feel they chuck things out because they can.

seemed normal behavior to me, nothing crazy that I could tell.

This week Coco is on a really flat route (not quite as flat as TempusF, but close - there are only two spots on the loop I noticed a big change in dynamics), not sure what route Taylor is on, but maybe not as flat? It doesn’t take a lot of elevation changes with a big group to show a lot of pace variation in my experience with Coco, maybe it’s the same with Taylor?

Its not me, i just tried some others and it was how i might expect. The 1.2 ones seemed to be really bad. 14 one seemed OK.

Its DEFFO Zwift … Tried it again and its working OK. So typical of Zwift.

Maybe next time ill get a ride maybe i wont

I have no problem with you moving to whatever service works best for you - none of the people responding to you work for Zwift and it’s completely OK if you want to do something else.

The pace partner you’re riding with is not faster than what you experienced previously. Dynamic pacing changes have been introduced since your last visit, but Taylor’s pace with dynamic pacing isn’t harder than the lowest effort pace partner you remember. If you’d like to describe your trainer we might be able to get to the bottom of whatever is going on. If not, I wish you all the best.

I’ve seen a few people mention problems with the pace partners recently and it has got me wondering if the problem is pace partners are not being slowed down on gravel roads with their higher rolling resistance.

Unfortunately nobody in this post has indicated what route they were on and it’s not something I am interested in testing myself. But maybe, if someone happens to find themselves riding with a pace partner on gravel roads they could check it out.

This is what I mean when I said a few people have mentioned problems with pace partners recently.

r/Zwift - Pace partner error with D. Miguel. When we changed from asphalt to... 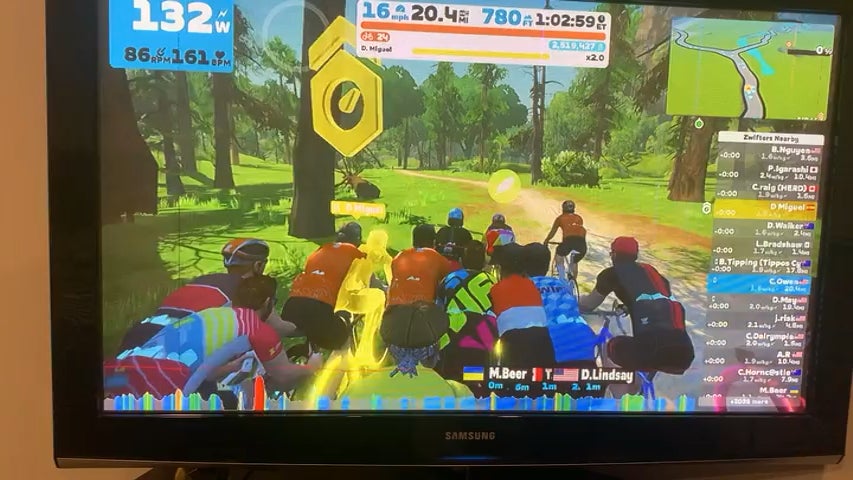 Any chance to managed to change to a TT bike since yesterday?

TT bike was the first thing I thought of when I read the description of the problem. Trying to ride a TT bike on a Pace Partner ride changes the dynamic completely due to lack of draft - you end up whip-sawing in and out of the pack, if you can even keep up at all.

@O_ne_Eyed_Jack : were you riding a TT bike for any of these rides?

No. Thanks for the suggestion. But its not me, my pc, connection or equiptment. Its ZWIFT. I proved this to my satisfaction last night by joining another slightly harder pace partner. ITS ZWIFT and I know this but …I will never know why or when it gets fixed thats what I hate about ZWIFT but when it works i love it.

There must be something going on with your setup.

There is currently many many people riding with the pace partners with no issue.

I very much doubt it. Why would another pace partner work a half hour later?

There are others with issues - so saying it must be my set up doesn’t stack up really.

The log file looked ok - the only weird thing was TWO cadence sensors i only have a NEO 2T no other devices attached like power pedals. But no clue on why that was shown?

I started a pace partner ride tonight and it was all over the place… i was off the front slowed down then off the back then couldn’t catch up despite riding a steady place.

So, was everybody off the front, and then everybody went off the back, or just you?

This is clearly not an isolated issue affecting just one person. Unless all those other people making posts about it here and in the reddit post I linked earlier have “something going on with their setup”

There seems to be an issue with the dirt road between Neokyo and Yumezi. Which just so happens to be the location where Urukazi joins the map and this problem only seems to have started since the last update. Coincidence? Or Zwift bug?