I’ll try that! Could be worth zwift’s while to emergency patch this though! Lots of people having a problem

The companion app stopped working properly during my ride this morning…

Seems to be lots of bugs at the moment

Notifications/Calendar recently broke on CA too. Gets a bit tiring.

Bit of a workaround here: Companion app - no notifications on Android - #7 by Dave_ZPCMR

Good workaround for the calendar stuff but there are many other issues being reported. Seems that last update has caused problems.

fwiw, I am still running vers. 3.29.0 of the CA. I haven’t opted to update to what’s showing as current 3.31 for iphone and can still go further into the future in events without issue. Strange though that website events page also can’t go further into the future though. The 3.31 CA version says it’s dated 12/15 – you’d think this issue would have been known prior to yesterday?

Issues have been reported on Android, not iOS as far as I’m aware.

My phone is good now. Others?

Better but still can’t get past Friday the 7th.

Yep, stops on Friday now, around the same time as now. That’s certainly a lot better. Doesn’t it usually show seven days ahead though?

Bugger, once I got ahead a few days I thought all good. Same Fri limit for me too (well thursday for my timezone)

Yeah you used to be able to scroll forward through to any event scheduled and for memory, I’ve gone out several weeks and albeit not much is scheduled out that far.

Yesterday I had thought I saw ZP also allowing us to scroll forward weeks but the schedule also stops Thursday (your fri).

Yep, Friday is now my limit!

So, going on day 3, still can’t view events past Friday afternoon and no response or acknowledgement from anyone from Zwift. This isn’t just a couple people problem - there has been talk about the problem with Companion on one of my cycling club’s FB page. It impacts anyone who uses Android. Can someone from Zwift at least acknowledge this thread? Sheesh.

This network error on Android: 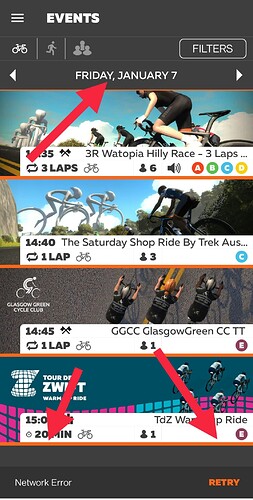 I checked online and it looks like there’s 4days to Friday.

But seriously this happened before so I would assume they know how to fix it.

So, going on day 3, still can’t view events past Friday afternoon and no response or acknowledgement from anyone from Zwift.

It’s been a holiday period, so I’m not surprised there’s been a lot less input from Zwift over the last week or so. This week I would expect things to get back to normal.

Apologies for radio silence - we have quite a few people off over the public holiday period.

I have seen this and will flag with the team. I see the same issue on my ZCA trying to view events past Friday.