Was Socks4watts in October and so too long ago to be included now? If you feel up to it then trying to do max efforts at 5m down will likely help correct the calculation.

It can affect zFTP. Exactly how remains unexplained - nobody talking about the formula has seen the formula.

zFTP and eFTP are training tools that Zwift is using to cat racers.
I get that.
I like using the Critical Power curve instead of 20 min efforts to guide my training and I was reassured by the agreement between Zwift and Intervals.
How do I set my training goals now?

I would love a 15 watts FTP increase but 15 watts increases seem to occur when new Zwifters perform their 2nd FTP test.
I’m 58 yo and have been on Zwift x 6 years and I know my FTP didn’t just increase by 15.

I don’t care what cat I’m in but now the accuracy of work outs is confusing.
There’s a reason coaches have riders hit certain power levels for certain periods.
It’s not recommended to just blow through the ceiling.
Now there’s a discrepancy.

Which number should I trust?

Which number should I trust?

The one that comes from a calculation you can inspect and understand.

If I didn’t have Intervals, I would be concerned about a power meter error and messing around with some calibration issues.

zFTP is not for workout FTP.

If you want a proper FTP for your workouts than you need to do a proper FTP test. I prefer the 4DP test it will give you g good insight to your current fitness level.

Using races and rides is not a FTP test at best you will get a estimate.

Gerrie, I’m sure that is the correct answer but not the one I want.
I just looked up what a 4 DP test is and that’s just more thinking than I want to do.
I only ride 4 days a week for 6 hours.
I like racing 1 day a week because it’s fun.
I do 2 hard work outs but focus on different kinds of hard (one road and one MTB).
I don’t like FTP tests and that’s what I liked about the power curve.
This is the first year I’ve track my CP so l would find out this spring if it worked.
This will also be the first time I take my power readings outside after indoor training all winter so I’m really looking forward to continuing my work outs and riding outdoors.
I may even put a power crank on my MTB. I don’t want my pedals smashing on roots.

No one like to do FTP tests that is why Trainerroad invested so much time and effort into AI FTP detection. LOL

I like racing 1 day a week because it’s fun.

If you’re racing in Zwift and going hard you can most likely use your normalized power (not average) to gauge your FTP. It may not be perfect but so many people mess up pacing on the traditional tests that they’re not always accurate either. Take a listen to this… 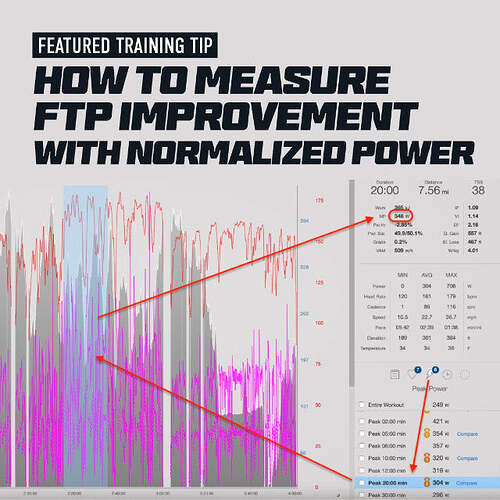 How to Measure FTP Improvement with Normalized Power

We don't always have to perform an FTP field test in order to measure our performance. We you may use normalized power during hard effort 20-60 minutes in length, or similar durations during group rides or races to track your performance and FTP over...

As Paul said, it can affect zFTP but we have not seen the formula Zwift use. We do have this though:

The answer is Yes and No. Let me try to explain. There was some wrong information that was spread since the beginning of the CE system, that we are using CP, and so the CP term was adopted and used. zFTP is calculated using a similar system as the classical CP. But because we have no way of knowin…

So we know that Zwift are doing some sort of selection to identify likely max efforts and then using those points to fit to a critical power equation. Next problem is there are several versions of the critical power model, each with different equations but David from Zwift used the term “classical CP”. I’d say the two most common CP equations that could be called “classical” are the original (Monod and Scherrer from 1965) and the extension by Morton (1996). Either way, the reason that a 5min effort can affect the zFTP is that once Zwift have selected what they think are your max efforts they will fit those to the equation and the more points along the curve to fit to, the more accurate the fit.

Here is the Morton version, the blue line is the Morton equation using a zFTP of 297W, the red symbols are your numbers that you posted from your Zwift profile. You’ve said the 12 minute effort was a true max and the 5 minute number is under what you think you can do. 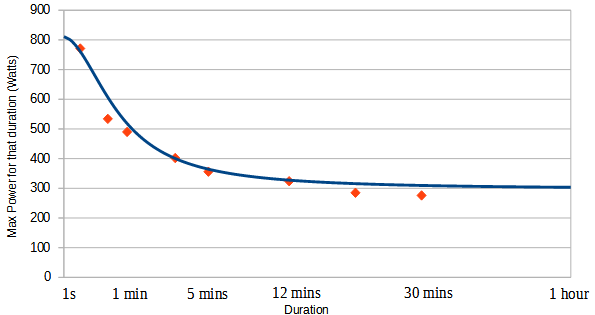 The curve is only accurate if the points are true max efforts, so if they are not but Zwift has still selected them for use then the curve will be wrong. As an example, using a 280W zFTP you can create a curve using the same equation that looks like this, I’ve tried to get it to pass through your 12 min power as you are confident in that effort and be a bit over your 5 minute power as your October result was higher than the current number. The red points below 5 minutes are now further from the curve so the fit is worse. If your max recorded power at the durations below 5 mins were higher, so those red points move up, you would be closer to this curve and presumably Zwift would see 280W as a better fit to the equation. 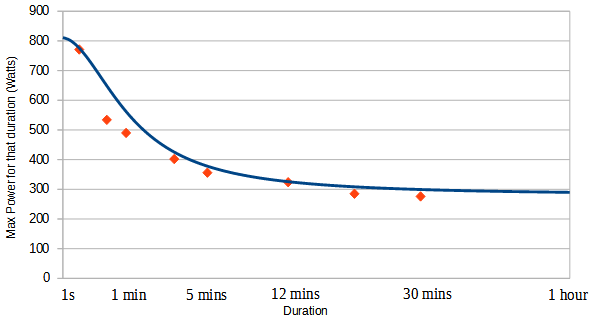 Caveat - we don’t really know which power/time points Zwift is using or if they are using this Morton equation, the original or some other variant.

This seems to be different guidance than provided elsewhere, given that the user-set FTP value is what’s used for workouts?

In case you have done maximal efforts within the last 2 months, in a variety of durations, ranging from 30 seconds to at least 12 min., we encourage the user to set their FTP to the zFTP value.

If you have done max efforts that’s the important part.

And if you done good max efforts then zFTP would match FTP closely.

Good max efforts? Seems to the information keeps ever changing from Zwift

I agree with the statement " good max efforts and they should agree".
This has been the case until this week.
The two systems are using the same data and had always shown similar increases of the exact same magnitude.
Now 2 watts vs 15 watts.
I get, if I don’t do a proper FTP test, these numbers may not reflect my true FTP, but why the sudden difference?

Working on a theory…