When doing some checks for Mad Monday races tonight, I noticed a bug in Zwiftpower calculating the category correctly. It’s likely a rare bug, but reporting this nevertheless: 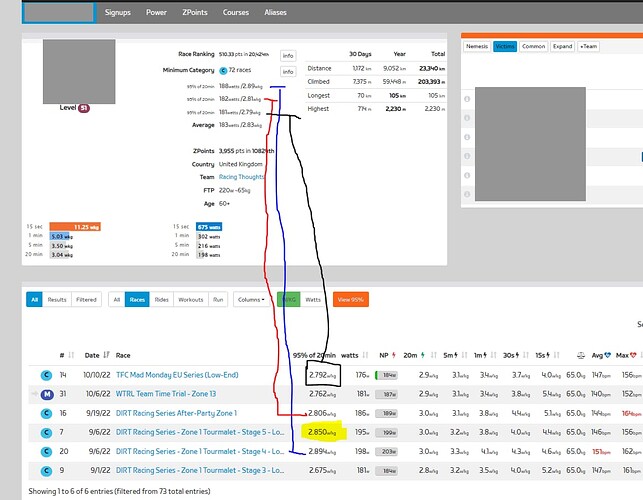 Correct; it takes only the best effort on the day.

It’s always been that way.

Alright thank you Sticky! And if I’m not mistaken you were the original developer of Zwiftpower, so thank you very much for all your work. Really impressive what you’ve built with Zwiftpower.

Just two questions out of curiosity: was there any rationale as to why you’d first take the best effort per day, before searching for the best 3 values?

Also as I have been testing some calculations in recent days, would it be an idea for future Zwift developments by Zwift HQ to only use race efforts for the average? Intuitively I was calculating the Zwift averages first by only looking to races. By also mixing the group rides etc. it decreases the estimated FTP for people who have raced less than 3 races in the last 90 days. (eg. 1 race at 3.0 w/kg and 2 group rides at 2.0 w/kg would give a much lower estimated FTP on Zwiftpower than just 1 race at 3.0 w/kg)

Zwift’s new CE system uses your best performances for the 2-50min power curve regardless of ride type. IMO, it’s very unlikely Zwift would make any changes to the ZP cat system given CE is replacing it (see this thread for more info - first post is the one to read).

@Gio_Hoeberigs I played no part in the development of Zwiftpower; that was @James_Hodges_KRT
I only provided Admin Support as I had a good understanding of how i worked.

Zwift have not developed Zwiftpower a jot since they seized control so I wouldn’t expect them to do much; notwithstanding the aforementioned move to CE.

So my question is: does Zwiftpower use the same efforts for both the w/kg and absolute watts (watt floors) in its calculation of estimated FTP? Or does it scan previous 90 days and look for the best 3 events with w/kg efforts AND seperately look for the best 3 events based on absolute 20 min power (which means, due to changing weights, the top 3 w/kg events can be different from the top 3 event with highest 20 min power)) ?

It takes the best 3 w/kg

Hey @James_Hodges_KRT and @S_ticky_KRT, I have found another interesting case in which Zwiftpower does not seem to calculate the FTP as one would expect. My script which simulates Zwiftpower FTP calculation has been pretty accurate in giving identical results, but today a new situation was found in which Zwiftpower gives a surprising result: 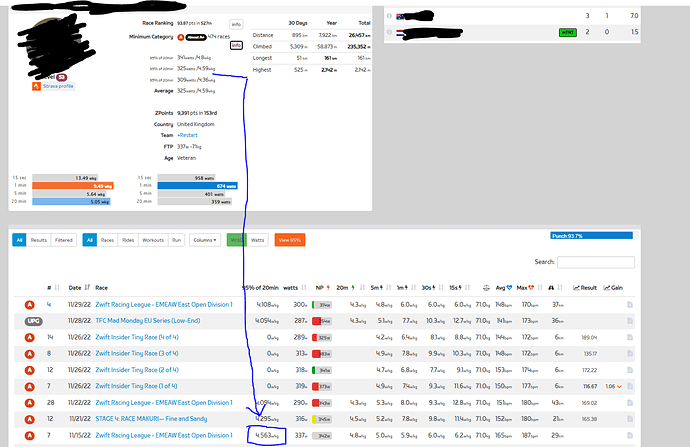 For some reason in this rider profile (ZwiftID=905145) the November 15th, 2022 TeamTimeTrial effort is not used for the FTP estimation. As I mentioned in some posts above, I would have expected Zwiftpower to only use races towards FTP estimation, but Zwiftpower uses group rides etc. as well for FTP estimation.

If my above guess is not correct: do you have any idea what other reason could explain why the November 15th activity is not used to calculate the estimated FTP?

Zwiftpower takes best 3 race efforts in a 90 day period; TTTs do not accrue ranking points so are/should be reclassified as a Ride so that points are not calculated.