Budget Bike for my Wahoo Kickr and Zwift

I have a 2004 Specialized Roubaix hooked up when I am on Zwift. It is starting to give up the ghost. What is a good budget option that is still comfortable. It probably wont leave my Zwift setup.

Any recommendations would be great. If I can get away with spending under 1k that would be more awesome.

Would it be an option to keep it and refresh the bits that are worn out on your Roubaix? You’d have a bike you know, and if you buy replacement parts smart (buy say 105 instead of Dura-ace for eg), you will likely be able to to for well under $1k (depending on what needs updating on your Roubaix of course).

I have my retired CX bike on my Kickr - same geometry as my outside bike, but I dont buy the high-end stuff when things break.

I agree with Dean.

What is wrong with the current bike, this can help us think what can be done.

If you’re determined to replace it, please say which country you’re shopping in.

Im in the US. You all make a good point. Right now i can only use 2 of the 3 gears up front and shifting is really hard. Maybe a complete rebuild with new components. I like the idea of 105 parts. How much do you think that would run me? Probably cheaper than a new bike.

I mean the frame is fine and comfortable. Have a great fizik seat.

Not to be presumptuous about what your mechanical knowledge is or isn’t, but is it possible the bike just needs to be serviced? Difficulty shifting could just be something like gunked up cables and housing, fraying cables, that sort of thing.

If the drivetrain is skipping around a lot on you, it’s worn and you will need some combination of new chain/cassette/chainrings/jockey wheels. But is there any reason to think the derailleurs need to be replaced?

I’d start there–service history and the cheap consumable parts, before a whole new drivetrain. And if it does need a new drivetrain, def that before a new bike.

I mean, unless of course you want a new bike. Because NBD is almost always an acceptable answer if you want it to be

Without attempting to service the bike, it’s hard to say if you need to replace components or not. The shifter cables and housing almost certainly need to be replaced. Shifters of that age often become sticky when the lubricant in the mechanism turns to sludge over the years. Spraying them with silicone lubricant can help. What I usually do with really gummy Shimano shifters is remove the shift cable, pour a quart of boiling water through the shifter, pausing to work it through the gears, blow it out with an air compressor, and spray the mechanism with TriFlow. If the shifter is dying, there are options for replacing just the shifters (Microshift makes Shimano compatible replacements that are not super expensive). The front derailleur can also have difficulty reaching the large chainring due to corrosion or worn pivots. You could be experiencing a combination of any/all of those issues.

It sounds like you have a triple crank. Shimano 105 is no longer available as a triple so you would need to replace the crankset to run modern 105 parts. If you use a wheel-on trainer, your rear wheel may be unable to accept an 11 or 12 speed cassette, so that may require replacing the rear wheel as well, or finding a cassette specifically designed to fit the older freehub. (If you’re on a direct drive trainer and don’t care about riding it outdoors, then the wheel doesn’t matter.) These factors might make a drivetrain upgrade rather expensive compared to buying a used bike in better condition.

This Park Tool video describes the shifter cable replacement. At 4:26 there are Shimano examples that probably look like your bike. For best results I would replace the housing as well. There’s Park Tool video for that as well.

I agree with what’s been said above. It could just need an overhaul or if you’re handy you can DIY and upgrade to a mechanical 105 or equivalent groupset for under $1K USD.

I went a similar route on the bike I ride indoors and went from a 10-speed 105 to 11-speed Ultegra (mechanical). Took my time and did the work over the course of a few days as parts and tools came in. Felt like I had a brand new machine except it’s a frame I know! Bonus was the satisfaction/knowledge for life from doing the work myself.

Thanks for all the helpful responses! I did service or dial in the rear derailleur and got the front working except for the hard shifting (up front only) i bet I could replace the cables and housing. They are all pretty rusted. One of the small screws on the front derailleur is stripped so tough to adjust. It is 3 sprockets up front.
Id like to get a modern set, 2x11, 2x12 mechanical. It is direct drive so no rear wheel or brakes needed

Maybe I start with the cables/housing then decide whether I buy the new components.

I just serviced a mates bike ready for winter Zwifting that’s been laid up during the summer.

The effect of sweat and electrolyte drinks cannot be underestimated. It was internally routed but the exposed parts were that rusty they were almost furry.

I cut the end of the cable but it wouldn’t pull back through. I had to use a pair of pliers and my bodyweight before it came out but only after the cable splintered leaving single strands in the internal lining. Many many hours later and using drills and other elaborate tools i cleared it.

Morale of the story, keep cables clean and replace before it’s too late.

So true!!! The cables really didn’t start rusting until the Roubaix became my Zwift rider. No wind to blow all that sweat behind me. And I sweat a lot more indoors even with 2 fans going. I can see white salt crystalized on my derailleurs. Luckily they are rust proof.

Should cables be oiled? I suppose so.

You can drip a little bit of something like Triflow into the housing with the cables. Ideally shouldn’t need it with brand new stuff (and if your cables are rusted, replacing both the housing and the cables would be the best way to go, as the rust will be inside the housing as well). But I know people who drip a little bit in all the same, because different brands of cables and housing don’t match as well as others.

Get some good Shimano cables and housing, a pair of cable cutters and a flat file (for filing the end of the cable housing when you cut it), and some zip ties, and you’re off and running. You can re-use the ferrules on the ends of the current housing, most likely.

Oh, and your LBS should be nice enough to give you a few cable end caps for free, you’ll want those too.

Edit: This is the stuff to get:

I would lube the cables just to avoid corrosion in a sweaty environment. If the cables are plastic coated (some Shimano ones are) then the lube is unnecessary.

I should make sure to stress too–when you replace the housing, you’ll want to file down the ends of the housing after you cut it. If you don’t have a specific cable cutting tool (and most people don’t) and you’re just using side-cutters or angle-cutter wire cutters, you’ll probably be left with some frayed ends of the strands inside the housing. In this pic, the shift cable housing is on the right. You can see the wire strands in the core of the housing. When you cut those with regular wire cutters, they’ll probably end up at different lengths, and some of them sticking out of the end of the plastic outer shell.

The pic shows a good example of the housing filed flush.

File those down with a regular flat file (or a bench grinder if you have one) until they’re flush with the outer shell, then put your ferrule (plastic or metal end cap) back on. It seems like a small thing, but I’ve seen shifting problems come from something that simple. The housing ends up contracting instead of staying stiff when you shift, because the metal strands are exposed and bending. 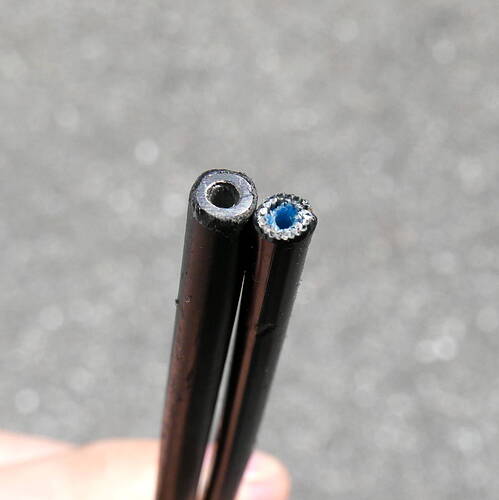 Makes sense. I am going to get this tool. Its $20 cheaper than the park tool. Would i still need to file? 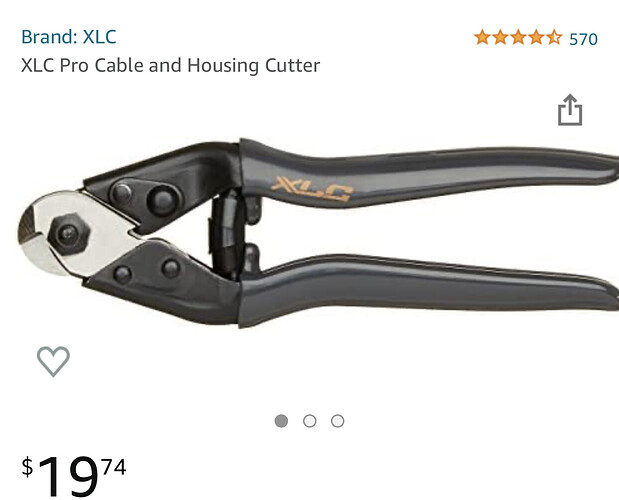 Nice! It might still help to file a little, but the initial cut should be a lot better. When I’m at the shop (at this point I’m seasonal help, pushing wrenches around), there’s a bench grinder right there so I typically take all my housing to the grinder even when the initial cut is pretty good, it’s easy enough there. But with a pair of cutters like that, there’s a good chance you won’t need to do much filing it at all.

I don’t think you’ll regret the purchase, but then again I rarely regret tool purchases myself

Thanks for your help!