Best excuse for getting dropped?

Yes you can get a flat in Zwift 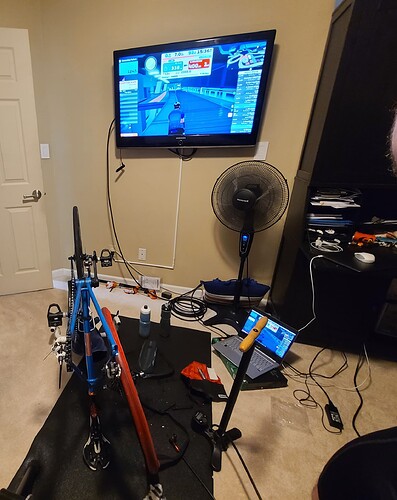 I actually managed to get two flats (the second was defective tube). Lets just say the days fitness goal went out the window…

I got a front tire flat last year.

I have worn out road tires up front and it was rubbing against a wooden stool I set my laptop on and I was failing to rotate the wheel and check air pressure up front and I wore a hole thru the tube.

I still rode my race or workout that day.

Yeah I’m thinking of upgrading from my kickr snap next season.

In general it’s a great trainer (especially when used with a power meter) but it certainly isn’t quiet at the really high wheel speeds zwift seems to generate, and steep gradients (I’m looking at you radio tower) at full trainer difficulty are just not enjoyable (slipping tires and noisy)…

I used to train in a place that had computrainers and there was always a case where the trainer tyres would bulge and fail, sometimes going off loudly.

Slipping tyres were always a problem at high power levels and low cadence.

The world of trainers with cassettes is so much better.

Flat tires are cool and all, but have you ever fallen off the rollers? Yes, you can crash on Zwift too

. There are way to many pointy things to land on inside…

Haven’t tried them in zwift yet, but maybe I should for base rides on flatter routes

I’ve had a couple flats on the Snap as well. First one was a tube that had inexplicably blown out during one of the Get Rolling races (probably had it pinched between the tire and rim - those trainer tires are a fight to install!) Huge bang that scared the crap out of me and echoed in the garage. Tube had a good three inch gash when I pulled it out. Needless to say I got dropped.

The second was a slow leak that somehow developed. I’ll take that one over the first for sure!

That does happen.
How about “The dog ate my (ANT+) dongle”
I once had a T-storm knock me out 21 laps into 25 of the Volcano.

What about when a Computrainer goes bang?

Never had it myself, but I’ve been there where one of them failed badly after smelling a bit odd. Someone else had one do nearly the same but he was observant enough to notice the funny burning smell and stopped immediately.

I also had a kickr bike fail, in that case I didn’t get dropped, I just couldn’t start.

“I have dropped my bottle/gel/towel/banana”