Any hope for altitude compensation based on our location/elevation for races?

But wait how can anyone debate the fact that riding at altitude gives you less power than riding at sea level?

Sure, you make less power at altitude. The amount less varies quite a bit depending on your physiology and how long you have been at altitude.

Right. Because we wouldn’t want to have a fair, level playing field for races in Zwift.

This seems like a reasonable option for race organizers (not outside of racing).

Oxygen affects aerobic power but not anaerobic, from what I’ve read, which is sort of obvious. So as power increases, the the component from anaerobic mechanisms increases, the power boost should be less. This can be estimated from FTP.

In the Ineos L’Alpe race, Egan Bernal was the obvious choice to win, but since he was riding in Colombia, at altitude, he was at a disadvantage, and Rohan Dennis won the race. This would have been an example of where an altitude adjustment would have made sense.

But for “important” races, where maybe more verification would be wanted, the feature could be turned off.

And if we’re going to go down this rabbit hole, shouldn’t Zwift also put an impairment on riders as they ascend the in-game climbs? That is, as you ride up the Alpe your performance should go down.

Altitude does impact the human boy’s ability to generate work, since the lower ambient pressure limits the amount of O2 that can enter the bloodstream. Acclimatization does reduce the impact, but does not eliminate it. So that’s that.

Now - as to whether Zwift should compensate for that, I believe that’s slightly entering science fiction. Racers in a virtual event are in different conditions to start with - different ambient pressure, temperature, time of day, all of which have an impact as well. And that’s not mentioning trainer/power meter type and calibration. You cannot reasonably expect all variables to be accounted for.

Build a hyperbaric chamber for you Zwift events?

Good points, Robert. I realize there are other factors that could contribute to a rider’s decreased power output, but none of the ones you listed, or that others have mentioned, seem to have the potential to affect a rider’s output as much as high altitude does.

And the thought of creating a hyperbaric chamber to train and race in has crossed my mind several times. That would probably be quite expensive though. But if I could breathe in oxygen as dense as sea level riders, that would definitely level the playing field a lot in my mind.

Ultimately, this isn’t a huge problem. It’s an interesting discussion to have and it would be great for those of us high altitude riders who like to race on zwift to have the option to have our power adjusted based on our altitude.

But it’s not the end of the world if we don’t get that. It just means that those of us at altitude can’t take zwift racing too seriously, because the game is currently designed to favor sea level racers.

You should never take a video game too seriously unless it is your livelihood. In which case you would not be living at altitude due to the disadvantage it puts you in.

On a side note hopefully clubs will allow the organization of races with club members. This way club organizers can make their own adjustments either via weight adjustments or restrictions of who can enter their club races.

yup. Great perspective, Vice. I think sometimes I can get too wrapped up in competing, and with races outside cancelled from the pandemic lockdown in our area, I’m a bit hungry for competition, and Zwift and RGT are the only places I can do that for now

And that’s a great idea about allowing meetup/race organizers to level the playing field within their own organized races.

We’ve started doing that with our team a bit, where we have a “sea level division” and an “altitude division.” 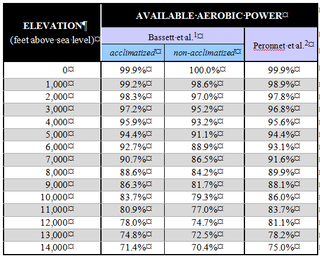 How much does increasing altitude decrease your aerobic performance? Two studies provide insight from world-class runners and cyclists.

This counts more for IRL riding but this is also a interesting discussion. training - Power Output at different Air Densities - Bicycles Stack Exchange

Thanks for posting this, Jonathan. This sentence from Joe’s article sums up the reason I started this thread in the first place:

There seems to be at least 3 solid studies that have been done that would provide conclusive evidence that acclimatized riders at higher altitudes have a power loss as a result of lower oxygen density.

I still wish the Zwift team would account for this

I’ve live at 9600’ in Summit County for 15 years, and would love to see Zwift provide altitude correction. Last year I was in cardiac rehab in Vail, and they oxygenate their workout room. Felt good! I don’t know how much it costs, but think it would benefit my high altitude training, i.e. sleep high - train low? For anyone interested, I came across this company:
altitudect dot com/oxygenating-mountain-homes/

Great info and discussion. I’m just joining Zwift from north of Taos, NM at 7,600’, about the altitude of Mexico City, and wanted to see if there is an altitude correction. Totally get that you can’t correct/confirm for everything. I’m guessing that in the future, all athletes will have a participation passport that will take most variables into account. I have a natural hematocrit level of over 50, which would have disqualified me from the TDF (as if…) and although I love living at altitude, I sleep like a log when I drop down to sea level. The “sleep high”, “train low” concept has been viewed as gospel, but it doesn’t take into account the massively restful sleep - and recovery - you get at a lower altitude. Would like to see any updates to the data. Cheers!

I’m so for this! Please can Zwift use the GPS altitude data in Zwift Companion to make things fair? My car let alone me is 10-13% down on power compared to when we are at sea level!!!

Whenever I race at sea level it feels so good, just that much easier with and extra 30-40w on tap. I had a PB on a climb on the coast that stood for two years - I wasn’t even trying to get one, just trying to shake off some wheel suckin’ locals he he.

To get an idea of the effect just look at when Rigo races on Zwift when he is at home in Columbia and you can see how much harder he has to work.

This is accurate. Once you are acclimatized you don’t even get a training advantage. This is why hypoxic chambers exist… so you can trick your body into thinking it is at altitude during your sleep cycle. Can’t imagine it is a good sleep though… I remember sleeping at 12000 feet for a couple of weeks… it was terrible.

Not sure I get a GPS signal in my basement when I Zwift.

Lovely place!! Off topic but you should hold some training camps up there. 3-4 weeks first week is super easy to acclimate, then it’s full gs until you go home.

Cell phones can triangulate position from cell towers and so altitude as well? As long as your phone gets a signal altitude should be able to be worked out.

The majority of people don’t Zwift on a cell phone though. Yes companion is there but it all sounds a bit much to me to try compensate for altitude when it’s going to be so easy to cheat the system.

You can’t force people to use a cell phone and if you are relying on computer IP/user address that is easy to spoof.